We were really lucky; the only thing we lost to Hurricane Sandy was my Monday post. (I'll make it up this week.) Australian artist Kirra Jamison makes sunny, colorful images that are just the antidote to all the rain and wind. (Not to make light of any of this. Things looks awful around New York. It's just that anything I could say would be trite. I'm so sorry for all who were affected.)

Email ThisBlogThis!Share to TwitterShare to FacebookShare to Pinterest
Labels: art


I'm not sure how much weight to give this, but Pantone released its color trend report for 2013. (It's the color institute's best guess for the season's most popular, influential colors—expect them to appear on clothing, walls, and other new products.) Pantone's top two? Monaco blue (sort of a not-bright cobalt) and dusk blue (a medium water shade). As far as I'm concerned, there's never too much blue around. PS: I also like Pantone's third and fourth colors: Emerald and something called "Grayed Jade." (The capitalization is definitely not mine. Pantone takes this all *very* seriously.)

Posted by Nadya Sagner at 6:21 AM No comments:


Just when I was despairing over what to post today, Serena and Lily emailed to announce their new art collection. All sorts of prettiness! The S&L collection is a great introduction to artists we might not otherwise see—especially the paintings, which are priced pretty well for framed originals. I love Serena and Lily's aesthetic, and the art they've chosen has a similar easy, relaxed feeling. And it's so nice that a home-decor company is championing original art that's relatively affordable.

Posted by Nadya Sagner at 9:23 AM No comments:


Cassandra Smith's painted antlers are slightly eerie and really beautiful. Smith finds the antlers in the Wisconsin woods; they're shed naturally by deer each year, so they're cruelty free. (I would never recommend them otherwise.) Their bumpy, prongy texture contrasts nicely with the pale, bright, or metallic colors. I'd put one atop a pile of pretty art books—or alone at the center of a table.


Posted by Nadya Sagner at 6:33 AM No comments:

Email ThisBlogThis!Share to TwitterShare to FacebookShare to Pinterest
Labels: art, etsy, outside


It's no secret that blue is my favorite color. I wear blue all the time, I like blue paint on my walls, and I'm definitely drawn to it in artwork. And of course I like "blue" in my blog names. It's peaceful and soothing. It's the color of water and sky. It's the color of my kids' eyes (and mine).

I didn't know, though, that more than half of the world's population prefers it too. Sick children in one study chose blue uniforms (over green or yellow) for their nurses. In another study, blue computer backgrounds enhanced creativity more than other colors. And blue pigments have been prized throughout human history; some cultures valued them more than gold. This New York Times article, accompanied by gorgeous photos, explains all sorts of things about—at least, what I think is—nature's purest, most mysterious and inspiring shade.


Posted by Nadya Sagner at 6:22 AM No comments:

I had hardly heard of Stuart Davis until I got to college. I think he's overlooked by a lot of people—he doesn't really fit into a school. Though he predated abstract expressionism and pop art by a few years, his work is as dynamic and interesting as, say, Robert Motherwell or Robert Rauschenberg. He painted snippets of advertising, words, and banal objects like egg beaters and salt shakers long before Andy Warhol ever considered a Brillo box or a soup can. His earlier cityscapes are beautifully simple, while his later paintings—known to be influenced by Davis's love of jazz—are big, bold, and fantastically composed. 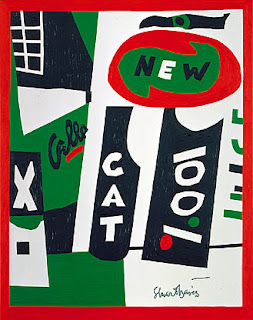 Posted by Nadya Sagner at 9:21 AM No comments:


Jen Gotch's photography has a dreamy, filtered look that gets me every time. Her sense of color is beautiful: pale and washy, with surprising bits of brightness. And her viewpoint is  a little bit skewed. Her pictures are clearly identifiable objects, but they work as abstract compositions too. They're also just plain pretty—perfect in a girl's room or bathroom.


Posted by Nadya Sagner at 7:45 AM No comments:

Email ThisBlogThis!Share to TwitterShare to FacebookShare to Pinterest
Labels: art, outside, photography


We've had a stylized street map of Paris hanging in every place we've lived—ever since we used the map in, what, 1995? Now, thanks to my iPhone, I can't imagine walking around with a creased paper map ever again. Which is a shame, because maps can be so beautiful. Our Paris map has definitely taken on a quaint quality, and it reminds me of that long-ago trip every time I look at it.

Lineposters, made by a engineer/graphic-designer couple, began as a single New York City subway print. Other versions were a hit with friends and at street fairs and on the High Line, and an Etsy shop was born. These prints have amazing lines and come in great, subdued, cool/warm color combinations (as well as black and white). They'd look perfect mixed with other pieces—or maybe as a triptych of favorite cities?


Posted by Nadya Sagner at 8:06 AM No comments:

This artist from the Netherlands makes exquisite collages of flowers and insects. They're ever so slightly three-dimensional, with delicate shadows behind the tiny pins. I like the simplest ones best, but she can go really over-the-top as well. (These amazing floral photographs have a similar look.)

Posted by Nadya Sagner at 6:18 AM No comments:

Email ThisBlogThis!Share to TwitterShare to FacebookShare to Pinterest
Labels: art, outside


How did I not know about this site? Tip Top Gallery offers "great art from a wide variety of artists...It's professional. Affordable. Collectible." As on 20x200, prints are available in several sizes, with larger, more expensive versions in more limited editions. Tip Top's artists skew modern and clean, with a nice mix of photography, illustration, and painting.

Accessible, inexpensive, appealing art? I'm all for it.


Posted by Nadya Sagner at 6:04 AM No comments: